The traditional story of Chanukkah (Feast of Dedication) comes from First and Second Maccabees—part of the Jewish apocryphal books. The day for its observance, Kislev 25 (ninth month), was 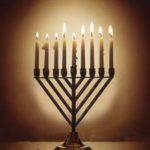 likely chosen based on temple prophecies in the book of Haggai. Haggai, the prophet, exhorted the Jews living in Israel to begin rebuilding the Holy Temple after neglecting to do so for years. Up to that time, they had only focused on taking care of their own houses.

Now set your heart (to consider), from this day and forward, from the twenty-fourth day of the ninth (month), from the day the foundation of the Holy Place was laid; set your heart…(Haggai 2.18).

From this day and forward suggests a new era had begun for the people, and with it the return of G-d’s blessings. The repetition of set your heart implies that they were ready to embrace the spiritual qualities necessary for laying a proper foundation for the Sanctuary—a right attitude and strong devotion. This was Judah the Maccabee’s approach when he said, let us go up to cleanse the Holy Place and rededicate. Maccabee was likely an acronym for “Mi Kamocha Ba’elim Adonai?” Who is like you, O G-d? The Maccabees knew there was no other G-d who could perform wonders like Adonai, and so their motivation in ascending the Temple Mount was to liberate Jerusalem and re-claim the Holy Temple.

Chanukah comes from the Hebrew root chanach, meaning “to dedicate.” A well-known verse in Proverbs (22.6), Train up a young man in the way he should go, and when he is old he will not depart from it, likely has another meaning. The word train is chanoch, “to dedicate.” The book of Proverbs falls into the category of Wisdom Literature, and the Hebrew word for proverb is mashal, meaning “dominion or rulership.” The proverbs express Kingdom principles related to the proper functioning of G-d’s House—His Temple. Since those who performed the services and ceremonies in the temple were the kohanim (priests), this verse might well be speaking of dedicating young priests for a lifetime of temple service.

One of the priests’ duties was to service the seven-branched menorah (lampstand) in the Holy Place of the temple. Each morning the kohanim filled the bowls with pure olive oil, and each afternoon they kindled its lights so that the seven lamps burned all through the night. The menorah became the symbol for both the spiritual and physical light that radiated from inside G-d’s House. The temple and Jerusalem were both called “the light of the world” (Genesis Rabbah 59). Josephus referred to Chanukkah as the “Festival of lights,” and Yeshua declared himself to be “the light of the world.”

Nay, they were so very glad at the revival of their customs when after a long time of intermission they unexpectedly had regained the freedom of their worship, that they made it a law for their posterity, that they should keep a festival on account of the restoration of their Temple worship for eight days. And from that time to this we celebrate this festival, and call it Lights. I suppose the reason was, because this liberty beyond our hopes appeared to us; and that thence was the name given to that festival .   (Josephus Antiquities 12.7.7)

The festival of Chanukkah has two story lines: The first is the military campaign the Maccabees waged against Antiochus IV Epiphanes, and the second is the menorah lighting ceremony in the temple. The context for the military battle began nearly a century earlier with Alexander the Great who had conquered the entire Middle East. After Alexander died (323 BCE), his kingdom was ultimately divided in two—the Seleucids in Syria and the Ptolemies in Egypt. Antiochus Epiphanes was the Seleucid king who took over the entire region, including the land of Israel. His was a regime of tyranny and terror. He brutally persecuted the Jewish people, making it a capital crime to observe the Sabbath and to circumcise their sons. Antiochus defiled the Holy Temple in a variety of ways, but the ultimate degradation came when a pig was sacrificed on the Altar of Burnt Offering. The Maccabees, led by Judah, fought back and finally defeated Antiochus. They took control of the Temple Mount, re-dedicated the temple, and chose the date Kislev 25 to celebrate Chanukkah.

The other story involves the cleansing and re-dedication of the temple. Relighting the menorah from the specially approved olive oil was the re-dedication ceremony. The miracle was that one day’s worth of oil burned for eight, giving the priests enough time to make more. Chanukkah is really more about the miracle of the oil than the military campaign. The traditional story can be found in the Talmud (Shabbat 21b):

For when the Greeks entered the Temple, they defiled all the oils in it, and when the Hasmonean dynasty prevailed against and defeated them, they searched and found only one cruse of oil which possessed the seal of the High Priest, but which contained sufficient oil for only one day's lighting; yet a miracle occurred there and they lit [the lamp] for eight days.

...After this, the sons of Israel went up to the Temple and rebuilt its gates and purified the Temple from the dead bodies and from the defilement. And they sought after pure olive oil to light the lamps therewith, but could not find any, except one bowl that was sealed with the signet ring of the High Priest from the days of Samuel the prophet and they knew that it was pure. There was in it [enough oil] to light [the lamps therewith] for one day, but the God of heaven whose name dwells there put therein his blessing and they were able to light from it eight days. (The Scroll of Antiochus)

Descriptions of the menorah (Ex. 25.31-40; 37.17-24) suggest it resembled a tree with branches, leaves, petals, and almond-like blossoms extending from the central shaft. The seven lamps, symbolizing seven eyes, were mounted in such a way as to give light to the space directly in front of the curtain leading into the Holy of Holies. Philo thought the menorah was the “tree of life” in the garden. He said the central shaft of the menorah represented the king who was an angelic being in the heavenly tabernacle, just as the High Priest was in the earthly temple. In the Ancient Near East a tree of life was a ritual symbol of both god and king (Widengren, The King and the Tree of Life in ANE Religion, 1951). Clement of Alexandria suggested Yeshua the Messiah was the menorah linked to the royal tree.

In the ancient world, the menorah was the symbol for the Divine Presence. British scholar Margaret Barker suggested the lamp of the temple was equally the presence of God with his people and the symbol of the dynasty. In Revelation, the Son of Man stood among the seven lampstands dressed as a kohen, wearing the ketonet (a long-sleeved priestly robe) along with a gold sash around his chest. His eyes were like a fiery flame, and he was the lamb with seven eyes. Enoch saw a gold, fiery tree of great size in the garden, which he identified as the tree of life that originally stood in the garden sanctuary.

This gives added meaning to the story of the burning bush. The Angel of the Lord appeared to Moses at the Mountain of G-d where a blazing fire burned from inside a sinai (a thornbush). Although the thornbush was in flames, it was not consumed. Perhaps this is a picture of the tree of life, the seven-branched menorah, with its bowls of anointing oil blazing in the midst of the garden sanctuary—holy ground to be sure. Interestingly, priests serving in the temple precincts could not wear shoes.

And the Angel of the Lord appeared to him in a flame of fire from the midst of a bush. So he looked, and behold, the bush was burning with fire, but the bush was not consumed. Then He said, “Do not draw near this place. Take your sandals off your feet, for the place where you stand is holy ground.” (Ex. 3.2,5)

Daniel’s associates were thrown into a fiery furnace where they were also not consumed by the fire. This suggests the furnace was a picture of the garden sanctuary where the menorah stood.

And I beheld a vision, there was a second house, greater than the former…and it was built of flames of fire…and its floor was of fire, and above it were lightnings and the path of the stars, and its ceiling also was flaming fire…And from underneath the throne came streams of flaming fire so that I could not look thereon. And the Great Glory sat thereon, and His raiment shone more brightly than the sun…the flaming fire was round about Him and a great fire stood before Him (I Enoch 14.15-22).

"Look!” he answered, “I see four men loose, walking in the midst of the fire; and they are not hurt, and the form of the fourth is like the Son of God…And the satraps, administrators, governors, and the king’s counselors gathered together, and they saw these men on whose bodies the fire had no power; the hair of their head was not singed nor were their garments affected, and the smell of fire was not on them" (Dan. 25-27).

Proverbs (3:18) describes Wisdom as a tree of life, stating that whoever holds fast to her will be made honorable. She was a tree whose fruit gave wisdom, whose leaves were for healing, and whose oil was used to open blind eyes. She was, in effect, the creation covenant described sometimes as the Spirit and sometimes as righteousness (Barker, 2010, p. 250).

A Targum to Genesis suggests the Etz Chaim (the tree of life) was the Torah linked to Wisdom. Yeshua is the living Torah who came down from the heavenly sanctuary. He is the tree of life, the menorah, which is a symbol for both God and King. He is the anointed High Priest and the Son of the Living G-d. The Bible and temple tradition describe the High Priest as the anointed one (Ex 30.30)—the Mashiach (Messiah).

The only mention of Chanukkah in the Bible is in the book of John (10.22), Then came Chanukkah in Jerusalem. It was winter, and Yeshua was walking around inside the Temple area, Shlomo’s Colonnade. The context for this chapter is the blindness of the shepherds, the temple leadership, who in their rejection of Yeshua, the living Torah, could not see or understand his message. They were hired hands and thieves who had come to steal, kill and destroy. In rejecting the Wisdom of G-d, they were blind guides leading blind sheep. The Chanukkah message was that Wisdom, in the form of the menorah, had returned to open blind eyes so that those living in darkness would see a great light in the land that lies in the shadow of death (Is. 9.1). The land that lies in the shadow of death is the Temple Mount. Celebrating Chanukkah today reminds us that, through Yeshua, light has dawned and the glory of G-d has risen over His people.

Pray for America and Support Israel
Get Involved!

Bonhoeffer: From Tyranny to Freedom Promo

ABOUT US
© Copyright Foundations In Torah - All Rights Reserved